I don’t think there is a single colorwork technique in knitting that is as easy to master and as versatile as double knitting. Even beginners who know how to knit and purl will be able to turn any two-colored picture or design into a knitted fabric with a little guidance. There is only one big issue most people struggle with: How do you do an invisible cast on in double knitting?

So, this tutorial will be all about it. I will show you altogether 4 different methods: starting from super invisible and ending with super easy. There’s a video included and I attached tons of additional pictures, tips and tricks, and everything else you will need to know about the different double knitting cast-on methods.

Now, you might wonder why I don’t just show you one method. I certainly could. But I noticed that a lot of beginners are confused because they watch a couple of videos or read some tutorials, and each shows them a different version. So, which one is right?

Tip: Don’t forget to check out my video tutorial on double knitting.

And here’s the thing. They (probably) all are. There is not THE most invisible cast on for double knitting. Instead, there are different techniques with different characteristics. As a result, depending on your project you will need a different method to get better results.

So, the confusing part is not that there are different techniques. It’s that a lot of instructions don’t tell you what these double knitting cast-ons are for and that there are alternatives. Some techniques create a fully separable edge. Others interlock in one color and yet others create a two color-edge. Some are stretchier and some are easier but a bit tighter. And here, I’m going to show you all of them so you can pick the one that is right for you and your project.

So, let’s dive right into it!

Note: I earn a small commission for purchases made through links in this article. 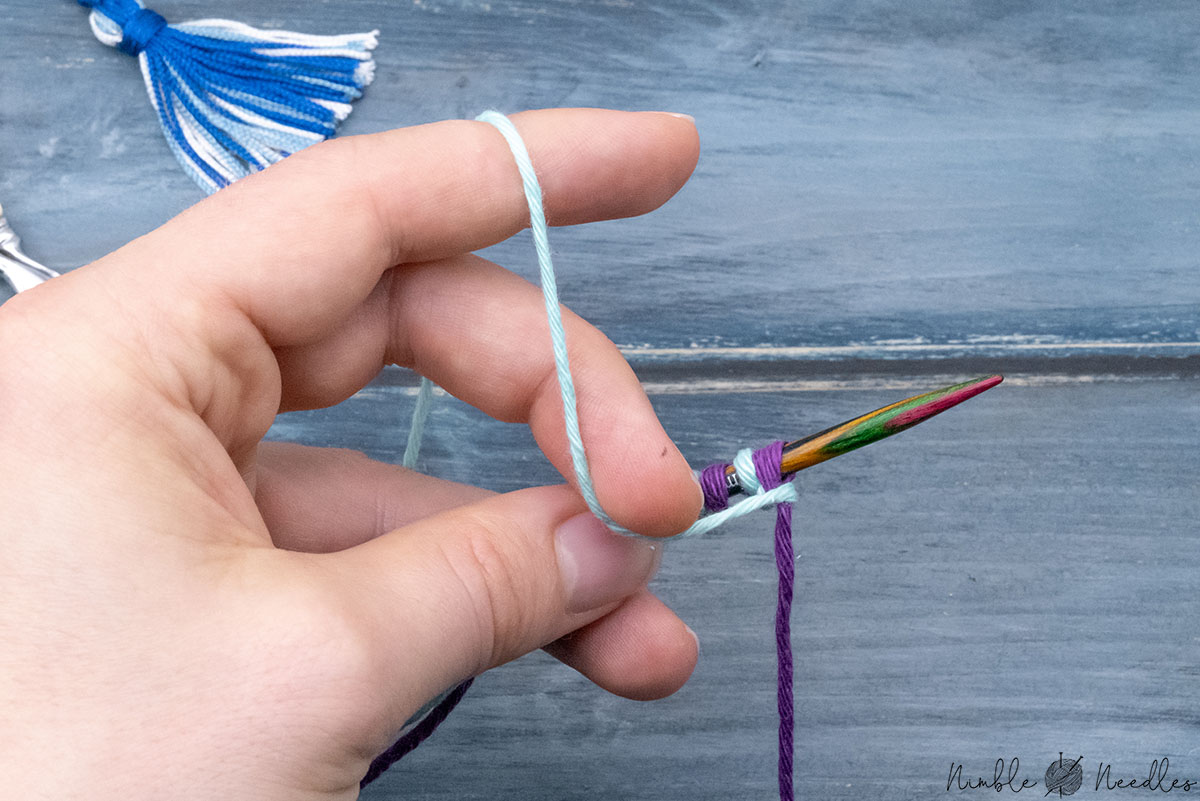 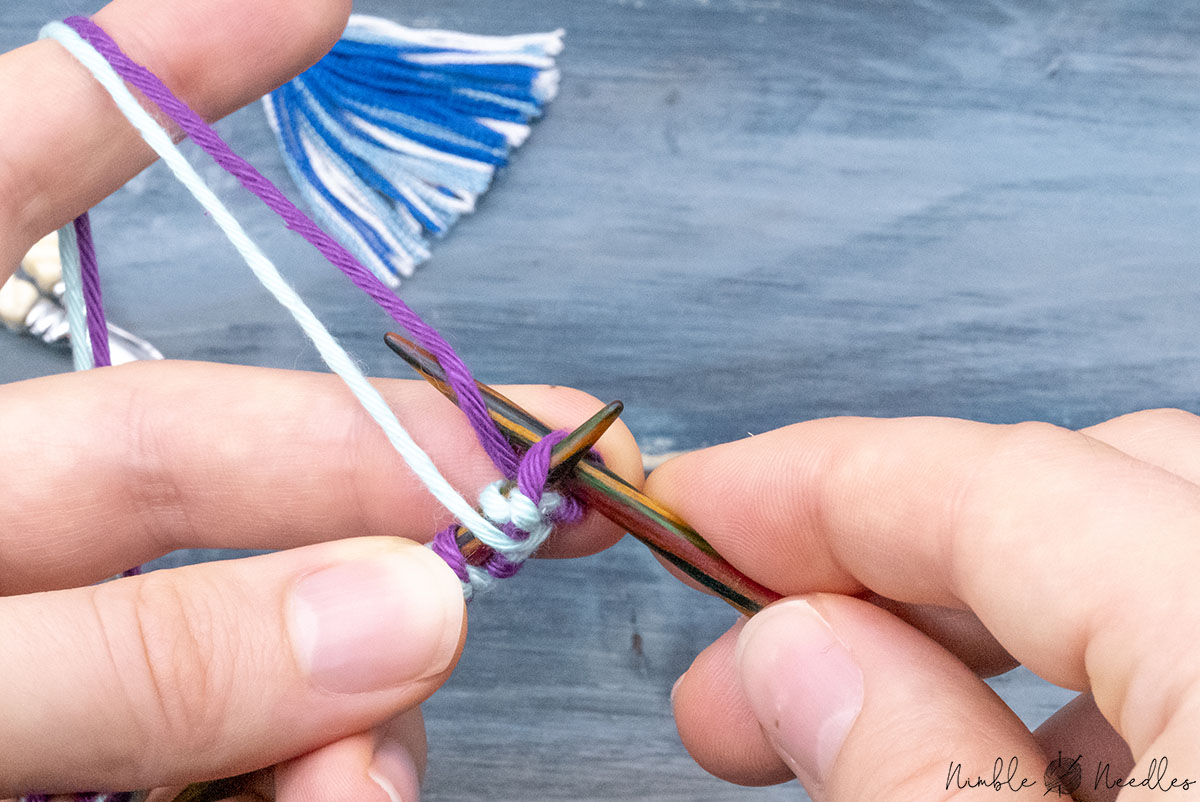 When you come to the slip knot at the end of the row, simply slip it off your needle without knitting. It's important to do that to create an invisible edge. 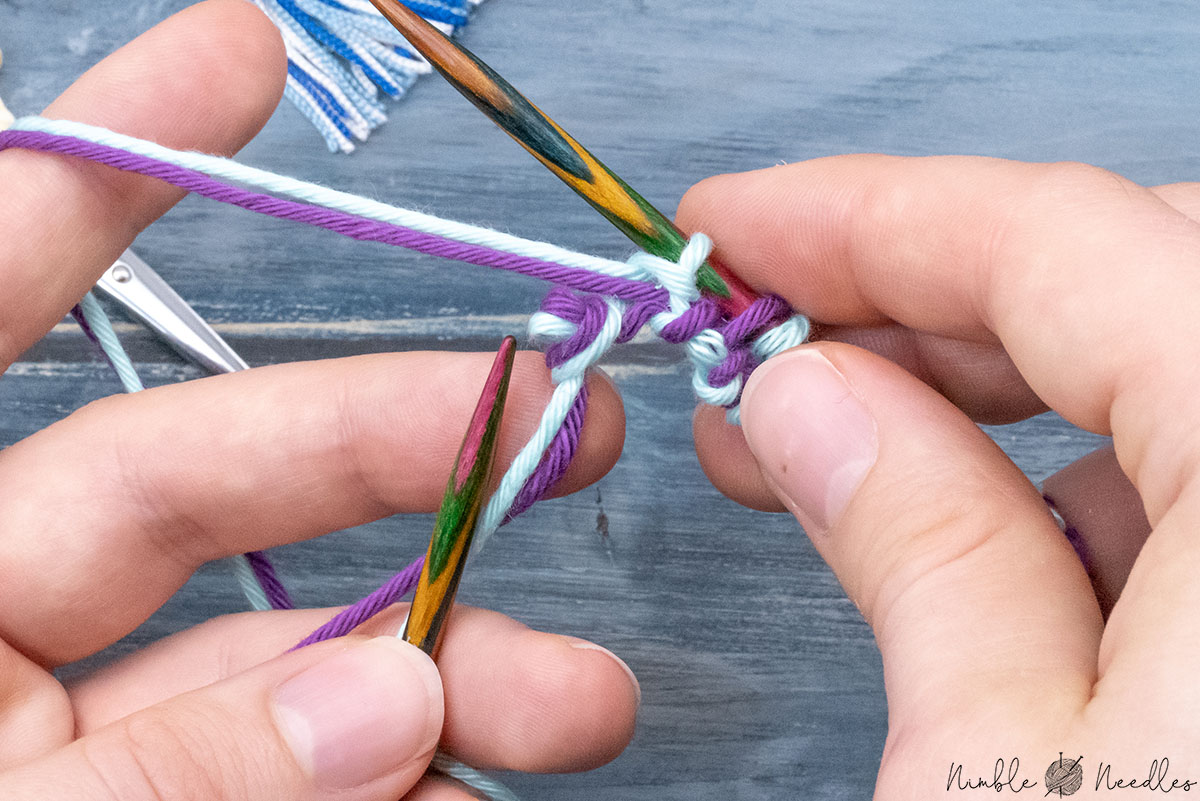 And you will notice that this invisible cast-on will flare outa bit. That's because it is just so stretchy. So, I actually don't think it's the best method for flat projects where you don't have a hem or so.

Tip: Here’s a tutorial on the corresponding invisible bind-off for double knitting.

My personal favorite method is a variation of the standard longtail cast on. Maybe you already know that you can also cast on purlwise. It’s actually quite the versatile technique you can also use to for 2×2 ribbings, and so on. But in this case, it can also create a very sturdy and neat edge for double knitting.

The reason behind it is quite simple. In double knitting, you always knit one stitch, and then you purl one stitch. So, it doesn’t take a magician to figure out that alternating between casting on a knit stitch and a purl stitch also works out. Here’s how to do it:

Step 1: Create a slip knot with both strands. Again, don’t count this stitch, you will have to unravel it later on. You do not need to leave a long tail – just a bit to weave in ends later on.

Step 2: Cast on one stitch with a standard longtail cast-on. If you start with the right side in the first round, then your primary color should be wrapped around your thumb.

Step 3: Insert your right needle into the loop around your index finger coming from above and behind.

Step 4: Pick up the strand towards the thumb from below.

Step 5: Pull it through the loop, let loose of the loop, and tighten up.

Step 6: Repeat steps 2-6 until you cast on the required number of stitches.

You can start with the normal double knitting technique in the first round right away. You only need to remember to drop the slip knot at the end. Don’t knit it, as it doesn’t look all that pretty.

This method creates a very firm two-colored edge. This will be perfect for scarves, potholders, and these kinds of projects. You don’t have that seamless transition, though. But of course, it’s a very neat way to frame any motif. So, I don’t think it’s necessarily a bad thing. Quite to the contrary. If used the right way, it can look super stunning.

3. Casting on for knitting two at a time

Double knitting is a great way to circumvent the limitations of both intarsia and especially fair isle. But you can also use it two knit two pieces at the same time. Socks, the sleeves of a sweater, or basically any other project you need multiples of.

The problem with the two double knitting cast-on techniques I showed you so far is that they create a linked fabric. And that’s something you may not want. Here’s a super simple solution:

Step 1: Cast on half as many stitches as you need in total with color A. You can use any cast-on technique you want. Maybe a knitted cast-on, etc.

Step 2: Cast on the other half of the required stitches with the same technique and using color B.

Step 3: Stack the two needles on top of each other with the tails hanging down on the far left.

Step 4: Pick up a third needle (doesn’t have to be the exact same size, you only need it for this one round and you won’t be knitting with it) and slip one stitch from the front needle.

Step 5: Slip one stitch from the back needle.

Step 6: Repeat steps 4+5 until you transferred all stitches to one needle. Make sure that you didn’t accidentally slip two stitches from the same needle in a row, and then you can start double knitting.

And that’s already it. There are methods that don’t involve slipping stitches. However, most of them involve some serious acrobatics and this often leads to a less than the ideal edge. So, even if it feels a bit like cheating, it’s actually the best way to cast on for double knitting two at a time – at least in my experience.

Important: Don’t use this technique for colorwork (unless you want an open edge).

4. Doing a standard long tail cast on in one color

But what if you can’t make any of the previous methods work. I admit that some of them are a bit tricky to work – especially the invisible cast on as it’s quite fiddly. But there’s an easy solution: Just cast on the required number of stitches using one color.

Step 1: Cast on stitches with any technique you prefer. I do recommend a longtail cast on, though.

Step 2: Turn the work around as you normally would to start knitting, and place the second color you want to join in between the needle and the working yarn.

Step 3: Knit one stitch as normal (this traps the new color in between those stitches).

Step 4: Start double knitting the normal way starting with the second stitch (in the new color).

This will create a very similar edge to method #2 – just in one color. This means it would be quite suitable for your first double knitting scarf or dishcloth as it’s moderately stretchy and quite clean.

Does it look perfect? Probably not. But what looks like a mistake can easily turn into a feature and an element of your design. It does add a nice opportunity to frame your subject. Besides, it will be totally invisible from the right side.

Also, if you want a neater edge on the right side, consider starting on the wrong side (meaning you purl the first stitch of the first row). This will create a much more invisible edge that does not have these little purl bumps. It’s my preferred method when I want to double knit ribbings.

Anyway, that’s how to cast on for double knitting. Feel free to comment below in case you still have any questions.

Hi there! My name is Norman and I am the face behind the scenes of this knitting blog. My mission is to provide you with in-depth tutorials and free patterns. Find out more about me here. And don't forget to check out my Etsy shop with all my knitting patterns.

I strongly believe that knitting patterns & tutorials should be available to everyone - no matter their income. But if you can afford it, consider becoming a patron to help me put out more content for everyone.

You can also find me on Ravelry.
If you just want to support my work, you can find my Patreon account here.