How to knit the Brioche Stitch

A step-by-step tutorial on Brioche Stitch knitting for beginners – in one color, two colors or in the round.

The Brioche Stitch is one of my all-time favorite stitches. It’s fun and easy to knit, it creates a very voluminous and cuddly fabric perfect for scarfs and other things to keep you warm in winter.

Before you start with this stitch, you should be familiar with casting on and casting off, the knit stitch, the purl stitch, knit two together, yarn over, and slipping a stitch (you’ll find all the tutorials in my free knitting school). This sounds complicated, but trust me, it really isn’t!

There are many amazing variations of the Brioche Stitch (I’m going to show you the three most important ones in this tutorial). They all have one thing in common: They are all a combination of a slipped stitch and a yarn over which are knitted together on the return row.

I am not sure why exactly it is called “brioche stitch”. But probably because the fluffiness reminded the creator of the equally fluffy french brioche dinner rolls. The best part: After one preparational row, it’s a one-row repeat pattern, so you really don’t need big charts or a good memory.

Note: I earn a small commission for purchases made through links in this article.

Another thing you should be aware of is that it takes a couple of rows (8-10) for the pattern to really show. So, don't worry if your work looks somewhat weird after the third row. That's normal.

Brioche Stitch with an uneven number of stitches

You can also knit this pattern with an uneven number of stitches, in this case, you have a 2 row repeat like this.

Repeat those two rows until the end of your work. In reality, you just have to k2tog all double stitches and yo&sl1p all single stitches. So, it’s not a big difference really.

How to knit Brioche Stitch into the row below

Instead of the yarn overs, you can also knit the brioche stitches into the row below. This method is less yarn thirsty than the regular brioche stitch but only really works with smooth yarns (hard to find the stitches one row below with a mohair yarn).

Here’s how you knit:

The resulting pattern will be a bit tighter and structured than the regular brioche stitch. It tends to look less neat, though, as the stitches from below fall less precise when lifted than the yarn overs.

For knitters who find it too difficult to combine the slip and yarn over into one stitch, this method will probably be a bit faster.

The regular garter stitch edge does not harmonize all that well with the brioche stitch. That’s why I recommend adding a proper 3 stitch selvage for projects like scarfs where you don’t sew the edges together. Here’s how you knit a brioche stitch edge:

After the second row, you can basically knit them as they appear where you knit every knit stitch and you slip every purl stitch with the yarn in front. This gives a very neat & round edge in double stockinette stitch.

How to increase and decrease Brioche stitch

It’s fairly easy to work an increase with a brioche stitch pattern. All you have to remember is that you can only increase the knit stitches.

Note: If you are knitting into the row below, you work it the same way (so knitting the row below twice with a yarn over in between). The only difference is that on the return row, you have to knit the yarn over as a regular knit stitch (there is no row below, obviously).

Here’s a more detailed tutorial on how to increase the brioche stitch that also covers increasing in the round and in two colors.

The decreases are a bit more complicated as you have to think in left- and right-leaning variations. But if you knit them in two colors, you can achieve some pretty fantastic effects. Here’s everything you need to know about how to knit the basic brioche decrease.

If you are daring enough, you can even try to create the brioche double decrease (br4st dec) for some even more stunning structures that will behave almost like the cable stitch.

A very interesting variation is the half brioche stitch. It’s less bulky than the “full” brioche stitch. Basically, it boils down to only knitting one row in the brioche stitch and in the return row you knit all stitches as they appear:

The half brioche stitch has two different sides. I personally think they are both pretty, so I wouldn’t call it a wrong and a right side. But you might have to decide which side will be the front of your work. A standard stockinette selvedge works fine with this stitch (so k1 in the first row and p1 on the return row).

Read my full tutorial on how to knit the half-brioche stitch here.

Another variation you really should try once is the 2 color brioche. I know, 2 colors might sound scary for a beginner, but there’s no need to be afraid!

Why? Your work will show a different (dominant) color from each side and you actually don’t have to knit with two colors at once. Instead, you work each row twice (but each time in a different color). It’s really easy.

Note: You will need double-pointed needles for the 2-color brioche stitch. Circular needles work as well, but it’s bit more complicated as you will have to slide the work back and forth between the two ends all the time.

Here’s how to do the 2 colored brioche stitch:

Cast on an uneven number of stitches in yarn A.

Now, slide the work back to the other end of your needles and start with yarn B on the first stitch.

Basically you work all the stitches as they appear. Only the first two rows are a bit tricky as it’s still a bit hard to see the difference between a purl and a knit double stitch. But once the ribs are fully formed, it’s incredibly easy.

You can bind off the brioche stitch with the regular bind off. Just remember two things:

If you are struggling with this, simply take a needle 1 or 2 sizes bigger for the bind off.

It creates quite the fluffy and neat little selvage. So, definitely an option you need to consider. Read my full tutorial on the best edge stitches here.

So, That’s how you knit the brioche stitch. Feel free to comment if you are still struggling with this stitch! 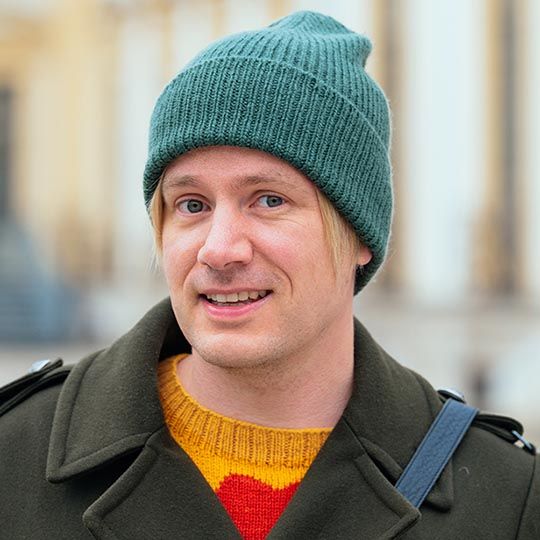